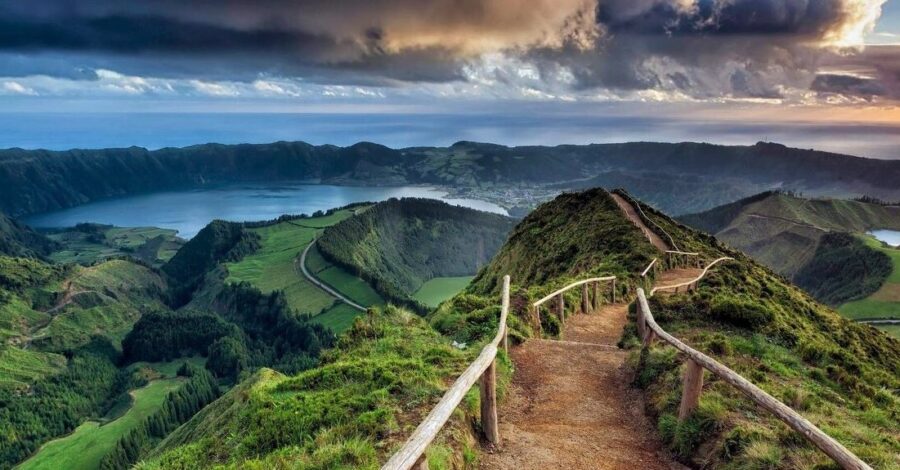 My personal recommendation is to plan a minimum of 4 full days for road tripping São Miguel + 1 more day for Ponta Delgada. Here below you will find my proposal on how to better allocate your time on the various geographical parts and attractions of the island. You can change the order of the days based on weather conditions and/or your mood!

São Miguel is home to the most recognizable (and photographed) attraction in the entire archipelago, the Lagoa das Sete Cidades. To be precise, it is not one but two lakes of different color (one blue and one green) separated by the Ponte dos Regos, a narrow bridge with seven round arches allowing the water to flow.

According to a legend, this twin lake got its color from the tears of the blue-eyed daughter of the King of Sete Cidades and a green-eyed shepherd. This young couple fell in love with each other but were forcefully separated by the King himself because of the difference in their social status.

Right next to Lagoa Azul and Lagoa Verde sits the village of Sete Cidades. Even if the name indicates seven cities (as per its precise translation), it actually refers to the seven craters that were formed following several volcanic eruptions in the broader area. 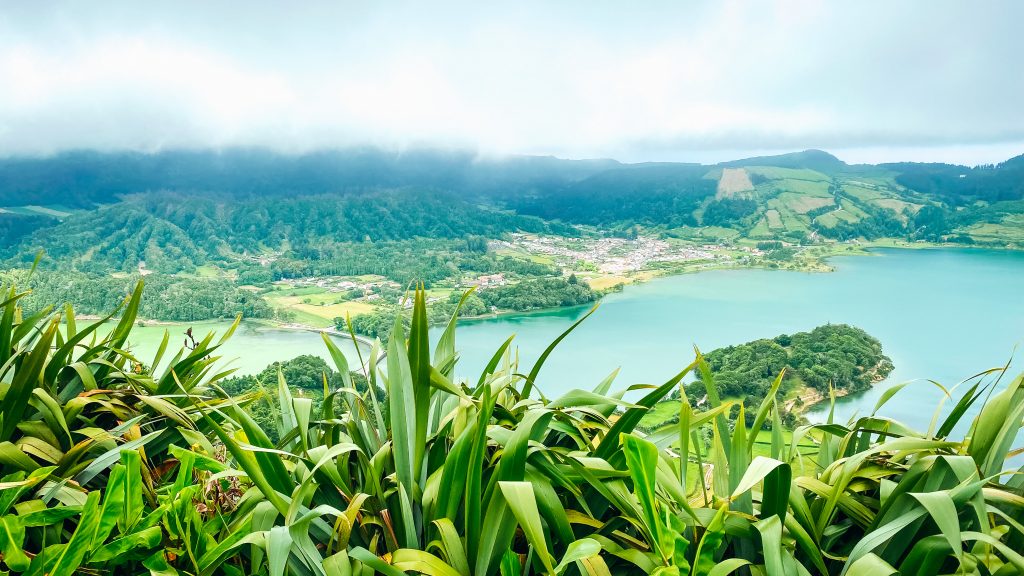 Right across the street, you will find the abandoned Monte Palace Hotel. The hotel opened in 1989 but went bankrupt in less than two years due to a lack of tourists. It remains abandoned ever since. Based on recent updates, there is an upcoming plan for renovating the hotel and bringing it back to life. Despite the signs clearly indicating that this is a private property with access strictly prohibited, a lot of visitors still manage to find their way inside. Their target is not only to explore the interior of the so-called “ghost” building but also climb to its rooftop for the most spectacular views of Sete Cidades.

As a quick heads up, this is a one-way hike. Meaning, you will need to leave your car at the parking lot of Vista do Rei and get back to pick it up. You can do so by using a taxi from the village of Sete Cidades.

Similar to the previous hike, you will need to get a taxi from the village of Sete Cidades back to your car.

Finish your exploration on the west side of the island by paying a visit to the geothermal springs of Ponta da Ferraria. What is amazing here is that you can swim in a natural pool surrounded by lava rock cliffs. The pools are filled, from the one side, with hot water coming straight from an underwater thermal spring, and from the other side with cold ocean water. The experience is absolutely mind-blowing! However, you should beware of low tide as the water can get extremely hot, reaching even 50° Celsius.

Time permitting, your last stop of the day should be the black sandy beach of Mosteiros. Probably the ideal spot to enjoy the sunset! 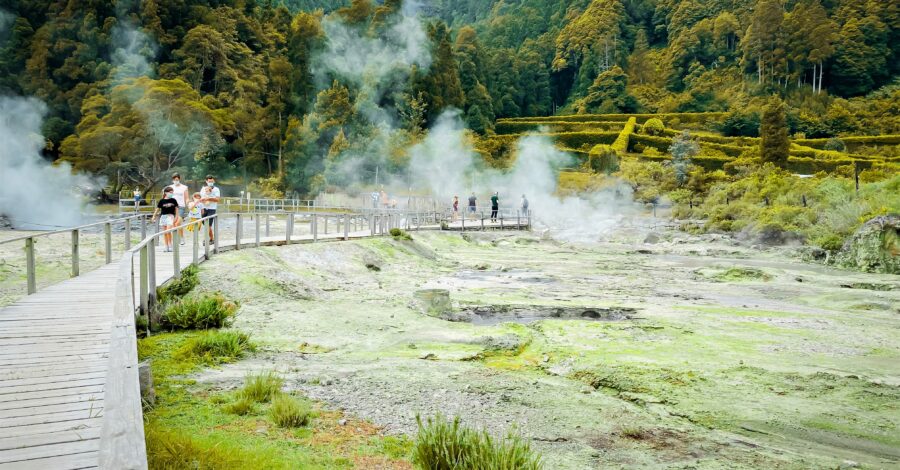 The Furnas Valley is a nature-lovers paradise, with several parks and volcanic geothermal sites of unique interest. It should be top-ranked on your itinerary while exploring the eastern side of the island.

While heading to Furnas, make a short detour for visiting the quaint chapel of Nossa Senhora da Paz. The architecture of the chapel is pretty impressive, while the views from atop absolutely spectacular.

Your next stop will be the Lagoa das Furnas. On the southern banks of the lake, the Capela de Nossa Senhora das Vitórias stands out with its distinctive Neo-Gothic style. This chapel was built in the order of a rich guy, Jose do Canto, as the funerary place of his beloved wife. After his death, Jose do Canto was also buried here, with the chapel being considered as the Portuguese equivalent of Taj Majal ever since.

Time permitting, you can also walk the Rota Circular da Lagoa das Furnas, an easy stroll that will take you all around the lake in less than 2h.

Once at the northern bank of the lake, you’ll find one of the most popular attractions in the area, the Caldeiras de Lagoa das Furnas. This is a fumarole field, resembling the moon surface, with geysers, bubbling muds, boiling water, and a strong smell of sulfur. The popular dish of the island, Cozido das Furnas (a mix of meats and vegetables), is cooked in this exact location. Cooking pots are buried in steaming holes on the ground and are left to slowly cook for about 6-7 hours. The dish is served in the restaurants of the nearby Furnas village.

You can find a similar site, the so-called Caldeiras Vulcânicas, in Furnas village itself. 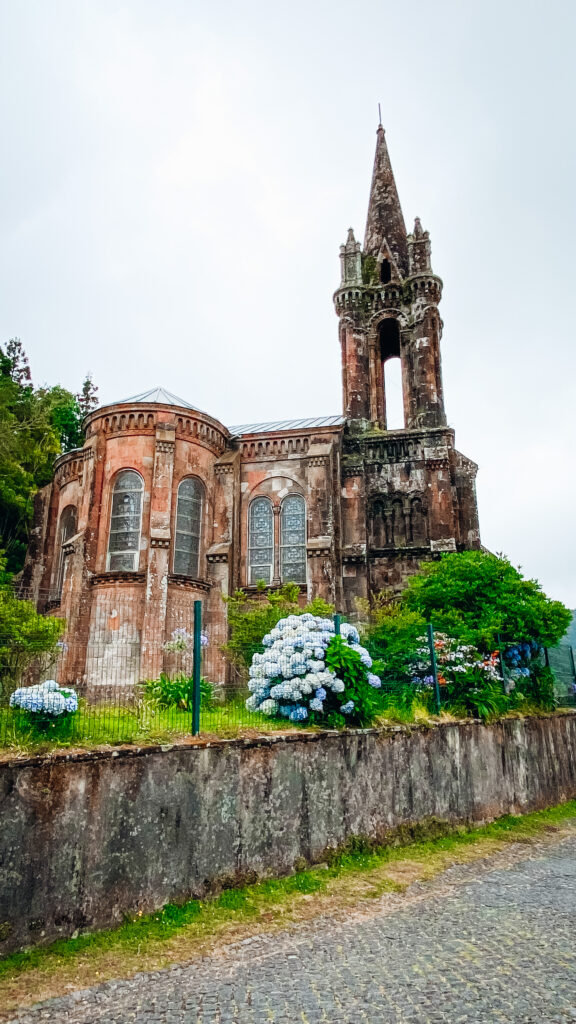 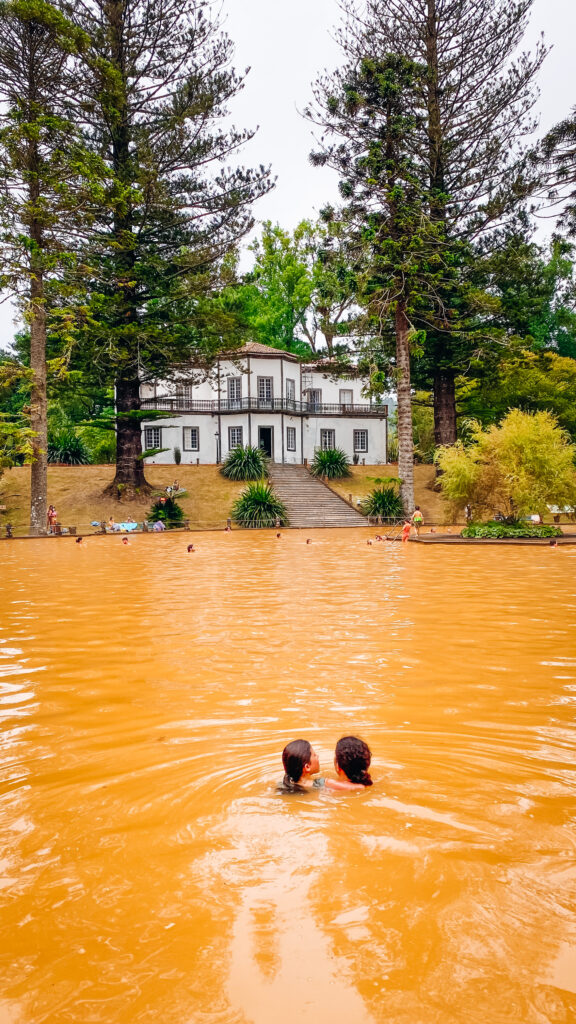 One of the best things to do in Furnas is bathing in the natural hot springs and geothermal pools. For the ultimate sense of relaxation and rejuvenation, plan sufficient time so as not to rush the experience.

The water of the pool is coming straight from thermal springs at a temperature of 35-40°C. Some people find the color of the water (rusty orange) rather uninviting, but in reality, it’s just enriched with iron and other minerals. The only thing you should be mindful of is not to wear a light-colored swimsuit, otherwise, you may risk getting it stained! If you are blond-haired, you’d better not put your hair into the water, either, as the rusty color does not come out easily.

The Garden dates back to 1775, and throughout the years has expanded to its present size at 125,000 m². Apart from the typical flora of the Azores, it is also the home to a remarkable collection of plants and flowers brought over from China, Australia, New Zealand, South Africa, and North America. Follow the signposted walking trail to make sure you will not miss a single thing! The trail is 3 km long and requires 45-50 min to complete.

Entrance Fee: 8€ (free for the residents of the hotel) 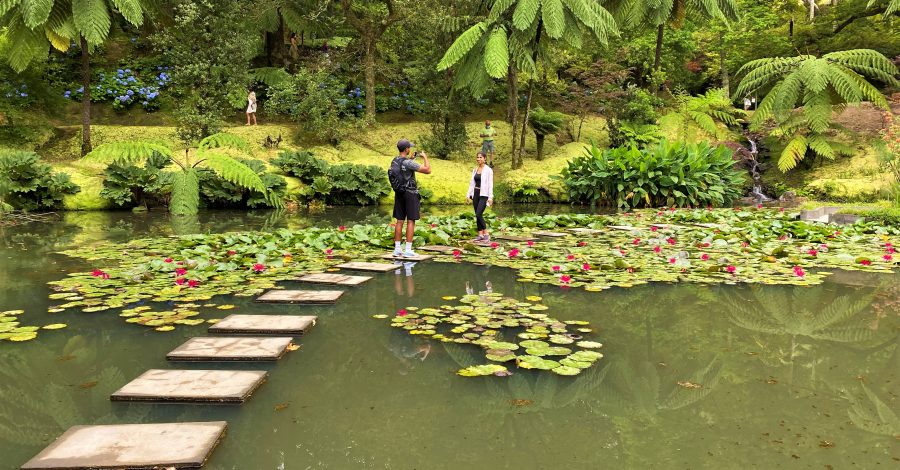 I. Lagoa do Fogo

On this day we will be exploring the central part of the island, starting from the beautiful Lagoa do Fogo, the Lake of Fire. Depending on how much time you can afford for this place, you can: 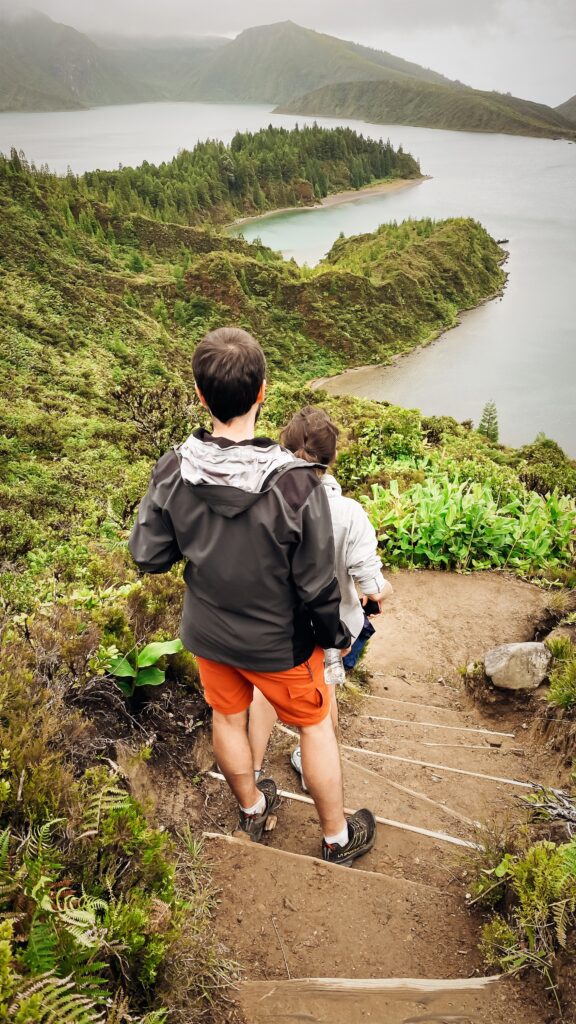 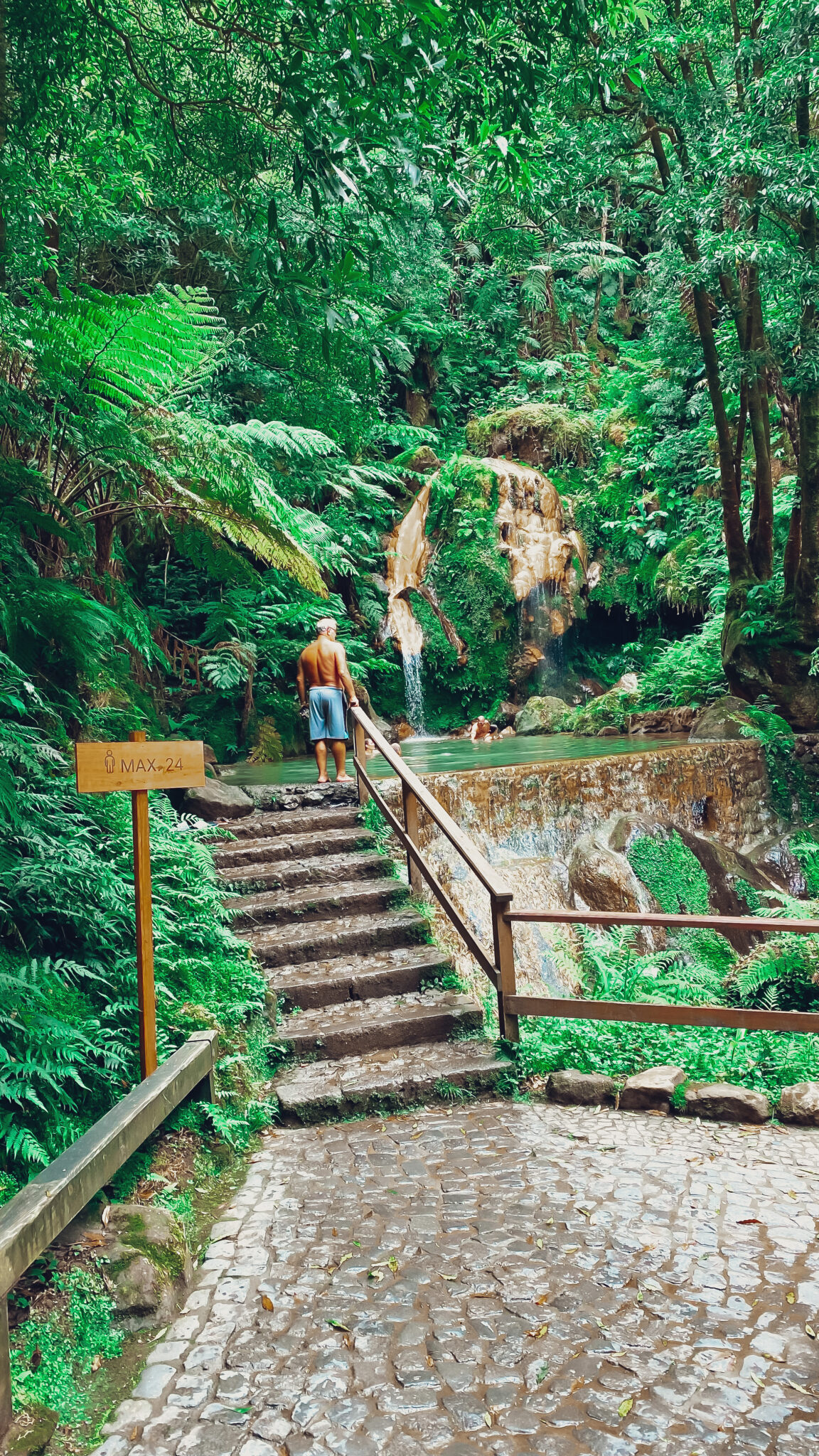 A visit to Lagoa do Fogo is perfectly combined with Caldeira Velha, a natural spa park nestled amidst a lush tropical forest, just 10’ drive away. The site offers a collection of thermal pools, as well as a refreshing waterfall spring pool at the end of the park, all surrounded by dense vegetation. The perfect place to let go, soak, relax, and unwind. By far, my personal favorite gem of the Azores.

As the site has become insanely popular in recent years, I highly suggest that you make your online booking well in advance so as to avoid standing in long queues!

If you didn’t do the long hiking trail in Lagoa do Fogo, but still want to engage with some kind of activity, this walking trail is a very good alternative. The starting point is pretty close to Caldeira Velha, so it makes absolute sense to add it to your itinerary on this day.

It is a small circular route of 8.5 km and of medium difficulty that goes past a dam, a hydroelectric power plant, and the Salto do Cabrito waterfall. It takes around 2.5h to complete. For more info, have a look at this specific trail map and detailed leaflet.

If you are not an activity kind of person, then you can find more relaxing alternatives to fill in your day in the nearby Porto Formoso area.

Here you can either visit a Tea Plantation (the whole experience includes a walking tour around the fields and factory + tea tasting) or just head to the nearby Praia dos Moinhos. This is one of the best beaches we have found on the island, with distinctive dark volcanic sand and good swimming facilities. The perfect spot for having your lunch and/or taking a relaxing break. We were highly recommended the Mare Cheia Restaurante, serving a variety of fresh seafood. Their specialty is the fish soup, which comes in a huge pot that can serve each person at least 2 times! Don’t miss it!

The last optional stop of the day is the emerald Lagoa do Congro. Nestled among a thick rainforest, and with slightly more challenging access through lush vegetation, makes the site an off-the-beaten-track destination for most visitors. However, Lagoa do Congro is undoubtedly one of the most beautiful lakes in São Miguel, literally sparkling on a sunny day. Make yourselves a favor and follow the short trail (of around 10-20’) down to the shore of the lake, and you will be amazed by how many shades of green you can see here! 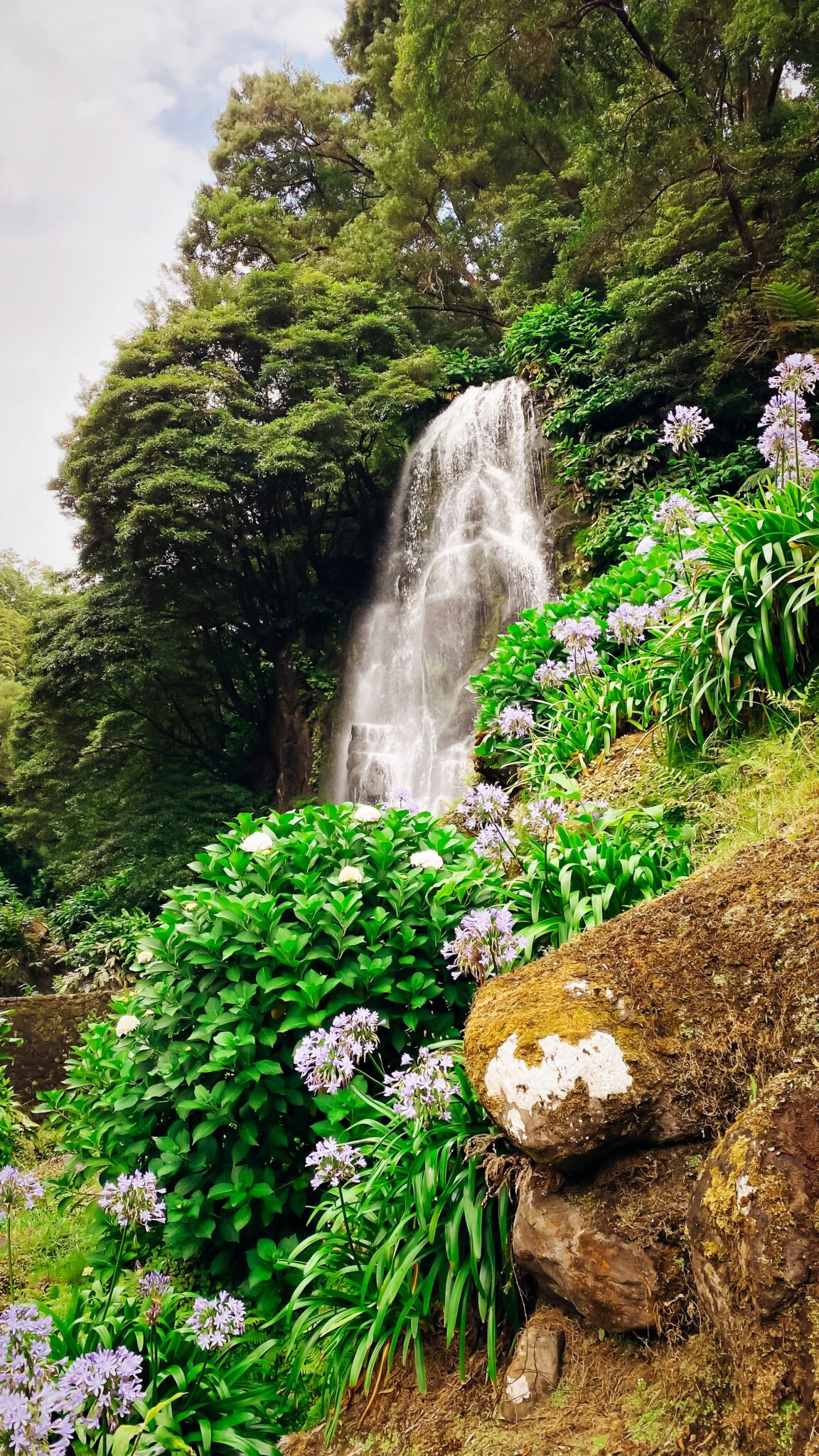 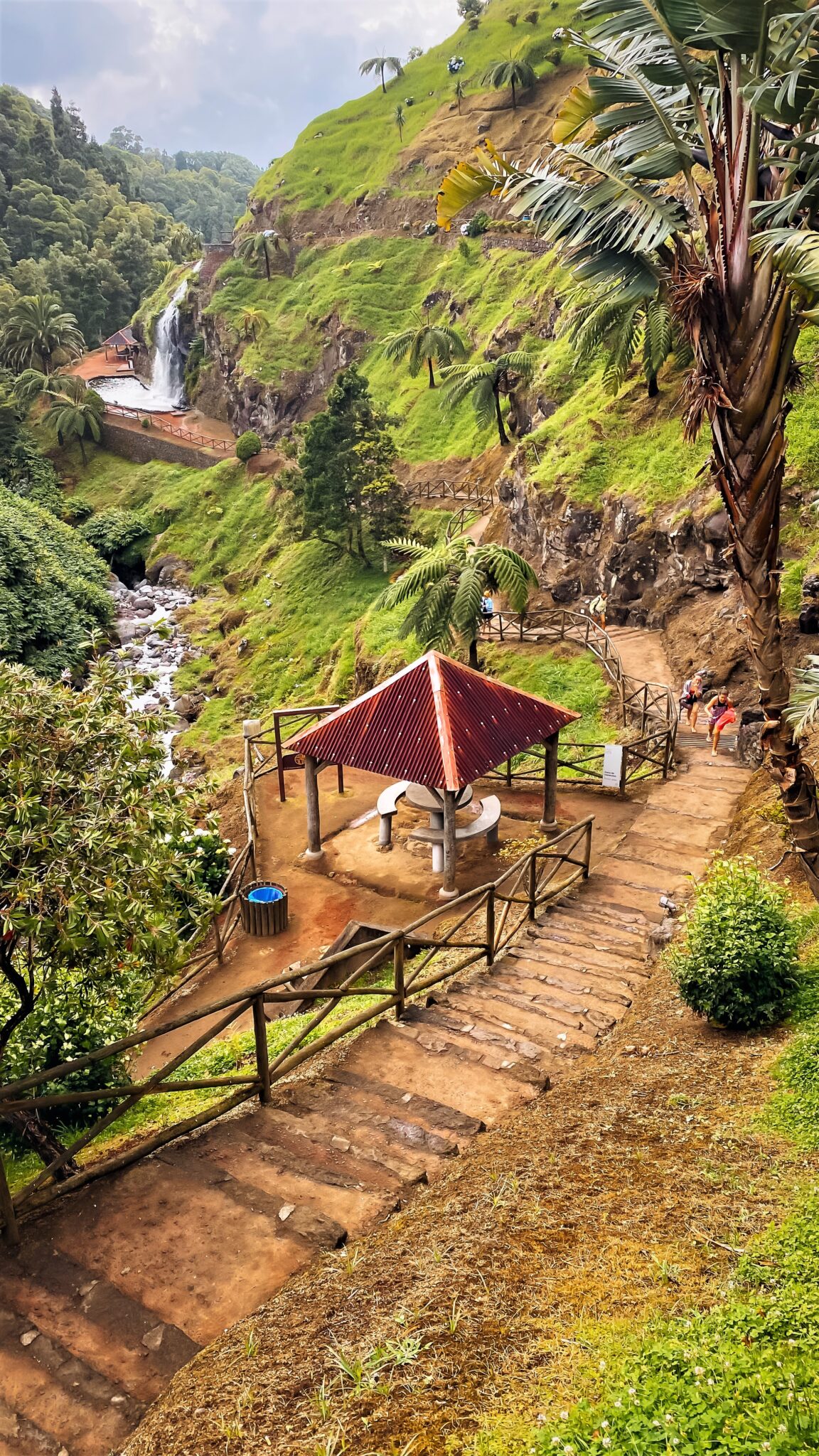 As already mentioned, the nature in the Azores is absolutely breathtaking. And the Nordeste region, lying on the most pristine and lush part of the island, is a sight you simply cannot miss. Covering so many different shades of green, it’s no exaggeration to say that the landscape resembles Hawaii.

Unluckily, we did not plan a fourth day for road tripping the island, therefore, we could only drive along the scenic Nordeste coastline. The weather was also rainy on the day of our visit, meaning our stops were quick and rushed.

For your information, I am listing here below a number of interesting sites that definitely worth visiting and should be included on your Day 4 itinerary:

You can also use your fourth day in São Miguel for visiting places you missed out on the previous days. One such site that we were, unfortunately, unable to visit is the Ilhéu de Vila Franca. This islet is the result of a submerged volcano where its flooded crater has formed a 150 m diameter wide natural pool. A unique attraction for São Miguel that has become world-famous thanks to a World Cliff Diving Championship that is taking place here every summer.

As a Natural Reserve, there is a strict limitation on the daily number of visitors (even more limited due to COVID-19). If you want to be one of the lucky few, you should target a seat on a boat departing from the marina of Vila Franca do Campo. Aim to be there early in the morning (the ticket office opens at 9.30 a.m.). The boats are running from June to October only. 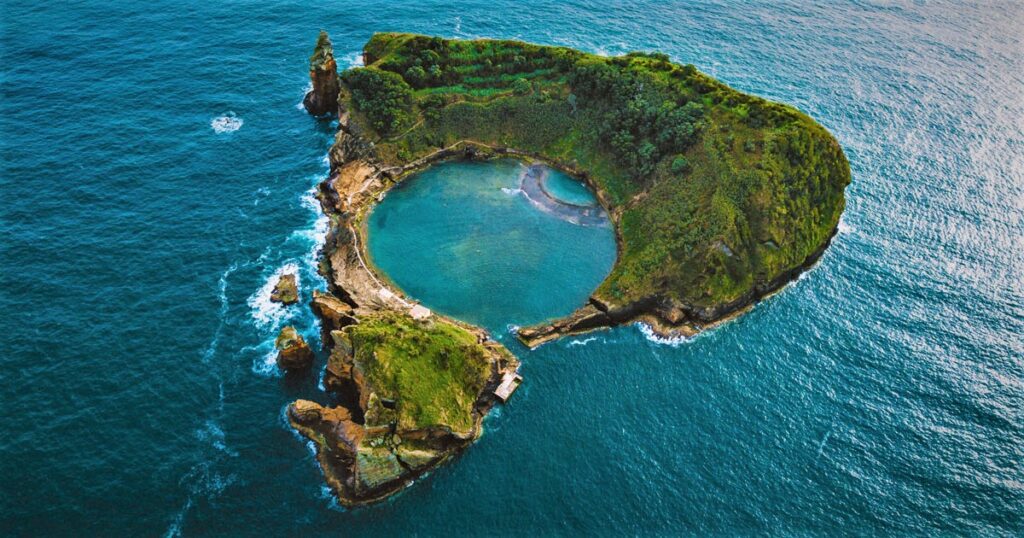 I highly suggest reserving one full day for Ponta Delgada alone. Apart from exploring the city at your own pace, you should also organize two very important visits/activities before leaving the island. 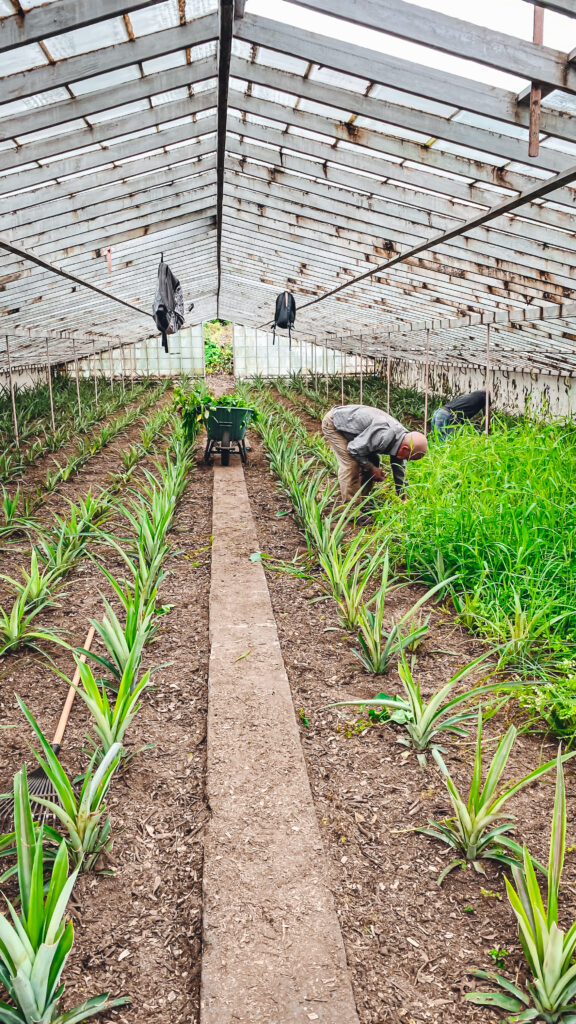 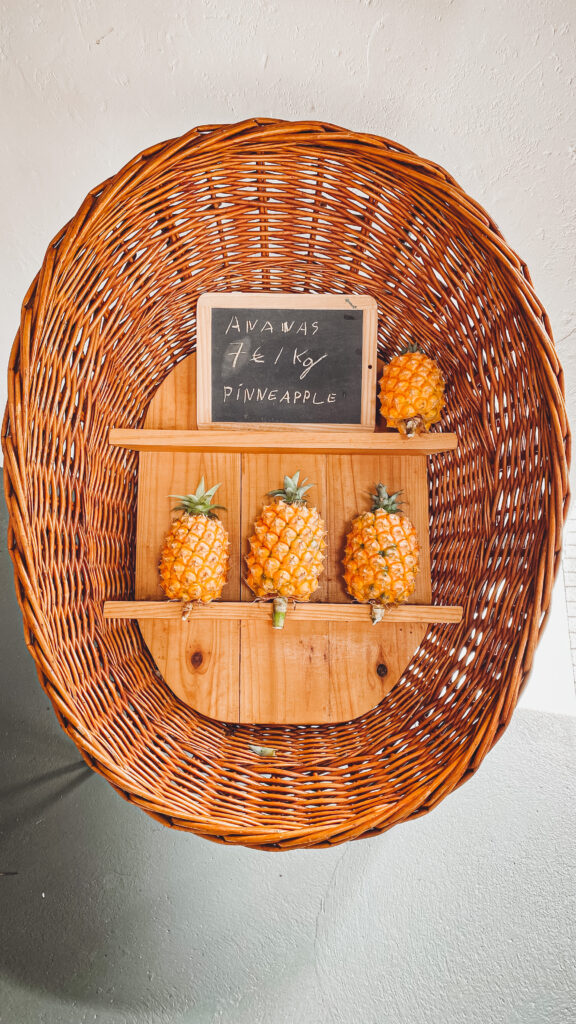 There are plenty of accommodation alternatives to choose from in Ponta Delgada, but do bear in mind that prices in the summertime can get significantly higher. Depending on the size of your group, you can book either a single hotel room or an entire apartment. We were a group of friends so we opted for an apartment, and have so much loved our stay at Casa Vista Marina.

Casa Vista Marina is a two-floor luxury apartment in the marina area of Ponta Delgada. On its ground floor, there is a comfy living room, dining area, and a fully equipped kitchen. On the first floor, there are two spacious bedrooms, while on the second floor a loft with a balcony overlooking the marina. The loft can serve either as a playground/sitting area or as a third bedroom. Elena, our host, was extremely attentive and we were warmly welcomed with lots of goodies and local delicacies for our breakfast!

Chernobyl – How To Safely Visit The Deadliest Place On Earth » 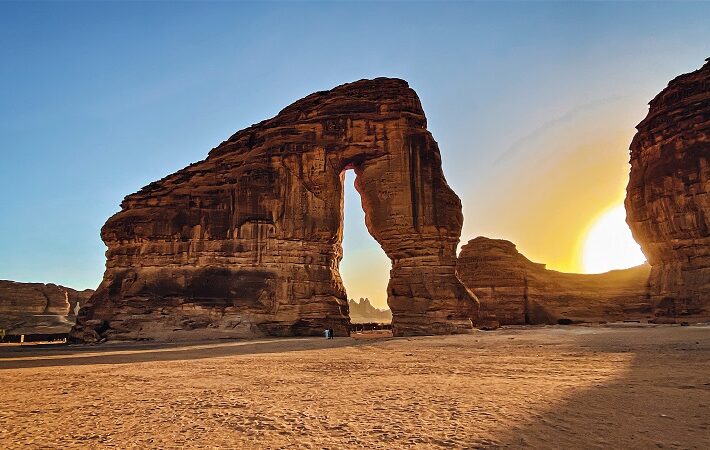 Best Of Saudi Arabia | The Perfect… 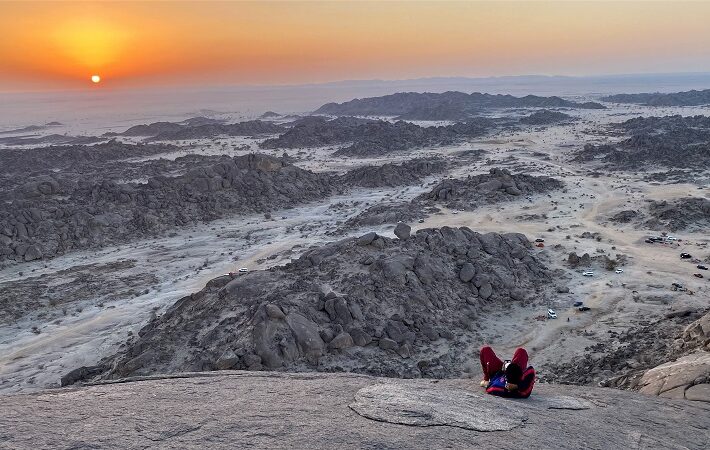 The Ultimate Survival Guide For Travelling To…

It is no big secret that we love colors! And even

Truck Painting is a form of art that is very popul

The festivals in the Kalash Valleys are marking th